Is your chinchilla insured? Get a quote for £2,000 of vet fee cover | Insure up to 3 pets per policy | We've been insuring exotic pets since 1996 | Check out our customer reviews on Feefo.


Own a cat or dog? Get pet insurance that covers up to £15,000 in vet fees every year, including dental for illness and accidents with Bought By Many.

What do you feed a pet chinchilla?

Chinchillas are herbivores – they eat a lot of plants and grasses.

Their diet should be high in fibre and protein and low in fat and moisture. It should consist of approximately 35% carbohydrates, 15% protein, 30% fibre, 4% sugar and no more than 3.5% fat.

In their natural environment, chinchillas chew the bark off trees. If your pet chinchilla has a lack of fibre in their diet, its teeth could become overgrown, which could then lead to fur chewing. A diet low in fibre will also disrupt their digestion.

Too much fat in a chinchilla’s diet could cause liver damage.

Chinchilla’s eat different types of vegetation but plants that are too lush might upset their tummies, so quantities need to be carefully regulated.

A constant supply of hay is highly recommended. Hay makes up most of their diet. Chinchillas’ digestive systems need hay and grass to stay healthy.

Chinchilla’s can become very ill without water, so they need constant access to clean drinking water. To keep the water clean, use a drinking bottle.

In addition, if you’re looking to get insurance for your pig, ExoticDirect is the only insurer in the UK that can cover up to £2,000 of vet fees for micro/mini/teapot pigs. Get a quote here 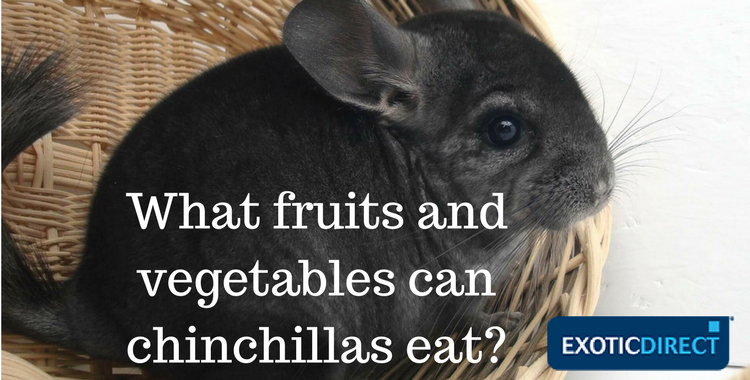 Leafy greens should be part of chinchillas' core diet. Fruit should only be given as treats.

What fruits and vegetables can chinchillas eat?

The following vegetables can up make the majority of a chinchillas’ core diet:

Chinchillas need around a tea spoon a day of fresh greens.

Fruits are only to be given as treats as they are high in sugars. Chinchillas can eat small amounts of fruit such as:

Exotic pet sources are not unanimous on the matter, but rabbits and chinchillas have different dietary requirements, so it is best to avoid giving chinchillas rabbit food pellets. 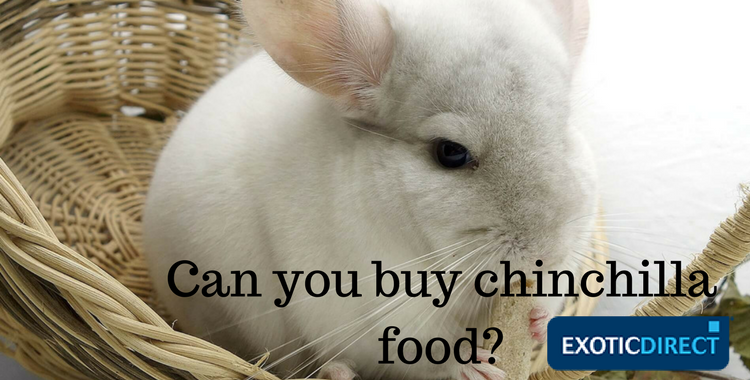 Can you buy chinchilla food?

You can buy chinchilla food pellets in pet shops.

Feed around two table spoons of pellets a day, preferably one in the morning and one at night as chinchillas tend to be most active around midnight and at dawn. 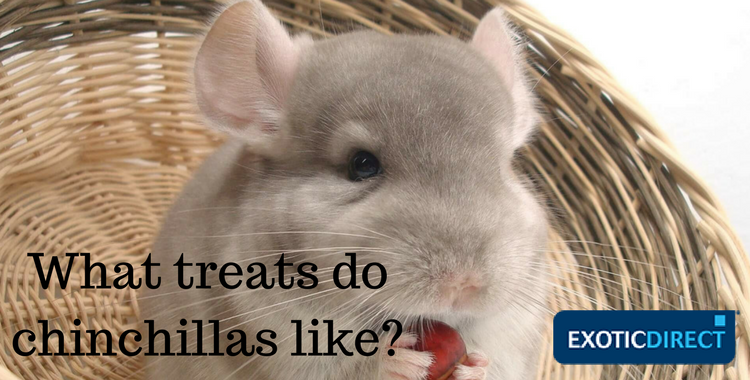 Treats should only be given in small ammounts because they are high in fat and sugars. Too much fat can cause live damage in chinchillas

Small amounts of dried fruit and root vegetables, such as raisins, sultanas and carrots.

Some sources recommend nuts and seeds as treats but you must bear in mind the high fat content in those. Chinchillas can get seriously ill if they are fed fatty foods so avoid giving nuts and seeds and other foods high in fat.

Control the amount of treats you give as they can be high in sugars and making too much of those available to your chinchilla might make it overweight, which can lead to illness.

Chinchillas have sensitive stomachs, so don’t give too much fruit and veg as they can cause diarrhoea.

Treats are normally higher in sugar and fat; too many can cause liver damage and weight gain, so don’t overfeed with treats.

Always check with you vet if unsure.

Always make sure they have clean drinking water and plenty of hay available. Replace the hay frequently as it can become mouldy.

Don’t introduce sudden dietary changes as they can make them very ill.

Make sure they’re eating and drinking every day and passing dry droppings.

Chinchillas, like rabbits, are coprophages – they eat their own droppings. They do that in order to absorb additional nutrients so don’t discourage them from doing so.

Avoid nuts and seeds as they are very high in fat, which can make chinchillas very ill.

What do ferrets eat? The best food for your ferret and the worst

Did you know that the carbohydrates and vegetable protein found in most fruit and vegetables can make your ferret poorly? And that your ferret's diet should primarily consist of meat, meat and more meat. Our article aims to offer you lots of advice and guidance on feeding your ferret the best diet.

What can Guinea Pigs eat?

Hay and grass should make up the majority of your Guinea Pig's diet. You can also feed small portions of vegetables and it's essential to include plenty of vitamin C. Read our list of what hay, veg and fruit you can feed, as well as what you can't.

How to apply for a Dangerous Wild Animal licence

Everything you need to know about applying for a dangerous wild animal licence and caring for your pet.