You need to consider the home environment, species (same or mixed), age, gender and the individual temperament of each bird and also how much time you have for the observation of your companion birds.

It is however believed that parrots thrive better with avian companions since they are - with very few exceptions - flock animals. Obviously putting the same species together is more natural for them and easier for you. But that isn’t always practical.

You may be offered a rescue or a parrot needing a new home who isn’t the same species as your current bird.

With care, experience and caution different species can be encouraged to live together but incautious throwing strange birds into one another’s company can have disastrous results. 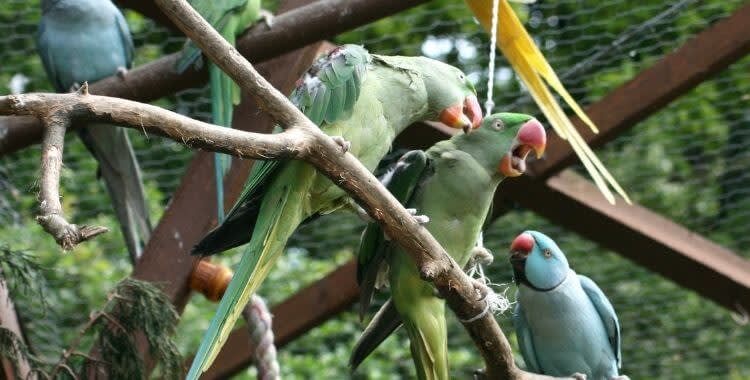 Common sense plays a role. Introducing a small parrot to a larger one clearly carries more risks should the larger parrot bite the smaller one. Your observation of body language here will be essential.

Budgies, cockatiels and lovebirds live in the wild in enormous flocks. They will usually accept a newcomer without too much fuss.

With the larger parrots problems can arise. A gradual introduction often results in acceptance.

I would never cage different birds together unless you are certain of their compatibility.

I’ve known hobby owners who have kept different species in the same cage. This is a practice I’d advise against because if there is any friction the parrot being attacked cannot fly away.

I haven’t kept parakeets indoors except rarely. In the aviary I have found various species mix well except when certain species are in breeding mode.

Rosellas and Ringneck parakeets, for example, if they are paired up and breeding can become aggressive to other parakeets.

A collection of parakeets of one sex will cohabit easily and with a large enough space to display their plumage in flight will give you constant delight.

When accustomed to enriched environments, branches, swings, toys etc from a young age they will play together. They are less destructive than their larger cousins.

One rescue cockatiel fell in love with Perdy a Lesser Sulphur-Crested cockatoo, twice his size. He sang all day to her. His affection was not reciprocated.

A case study of my macaws

Benni Blue and Gold macaw is now six. When he was almost one, I brought in a young Blue and Gold - a cock bird. Benni never accepted this male youngster and would harass him when they were loose together. Mino is now happily rehomed.

I had noticed that Benni chased cock birds but not hens. Mina a Military macaw hen came to live with us. From the start, Benni accepted her. When I fed her evening formula from a spoon, he’d ask for one too.

The two macaws are firm friends and free fly every day. When they were younger, visiting macaws were accepted in the aviary. Now they are mature they don’t accept stranger birds.

However, I have friends who keep same sex macaws with no problems which is why the individual temperament of each bird must be considered.

In dealing with parrots, you cannot over emphasise Susan Friedman’s dictum, ‘each parrot is a study of one.’

How to introduce parrots indoors

The standard procedure to introduce two parrots to one another is much the same indoors as in the aviary.

Unless you are certain that the new bird hasn’t been exposed to any disease, you would keep it in quarantine for 2 – 6 weeks in another space. The length of quarantine should be discussed with your avian vet. You can find a vet here.

Birds coming from a safe environment (you know they haven’t been exposed to illness) will not need quarantine. I have requested a vet certificate though to be sure that there was no psittacosis in the bird.

Once you’re sure there is no disease, you take the cage into the resident bird’s space so that they are within sight of one another.

Then you observe their behaviour. How are they communicating? Are they rousing their neck feathers in a friendly manner or are they showing signs of discomfort? Pinning their eyes, tail flaring and so forth.

You’ll find that when two strange parrots meet there can be a lot of squawking. If the birds are of similar size, the danger of harm from one biting the other is lessened.

When you consider the parrots are accepting the other’s presence you can put the cages side by side.

Again, it will be a matter of delicate judgement when you open the cage doors and let them meet.

At this stage, if the birds are accustomed to the step up, each can be held by a person facing one another. You can observe if any aggressive behaviour is evident.

How long it will take to become used to each other depends on the birds. It can be almost immediate or take some weeks.

In a few cases acceptance will never occur. The new bird has to be rehomed or they have to be kept separated.

With some birds’ introductions will go smoothly and within a few days they will accept one another’s presence.

Quite soon, they'll eat from the same play stand, although I would recommend providing at least two or more feeding stations, for foraging. Eventually you’ll be pleased when they can share a bowl.

I have taken two cockatoos and two greys together to a vet in the same cage, that took a lot of habituation to one another.

Here are some case studies of my own flock both positive and negative.

Lena and Archie an elderly pair of wild caught Orange-winged Amazons came to me from a local zoo.

They had lived together for 20 years in a private home but had been separated for 12 years in the zoo. I put them back together and they were never more than one metre apart for the 11 years they lived until both died in their 50s.

When Basil and his mate also a wild caught Orange-winged Amazon rescue joined the flock, I kept the two pairs separately in another part of the aviary.

Within a couple of months, the new birds had their flight door opened and they visited the old Amazons without any problems.

Artha hen was my first parrot. After Artha had been here for 18 months I decided she needed a companion, so, I returned to Barrett Watson, Artha’s breeder. I’d advise anyone buying a new bird never to buy sight unseen from the internet. There is nothing equal to face to face interactions.

Caring breeders like Barrett Watson will often allow prospective purchasers to visit the aviaries and watch the young parrot being weaned.

Artha and I had visited Casper twice at Barrett’s. The first night I brought the young parrot home I put him in a smaller cage next to Artha’s. Neither bird would settle until they shared the large King cage.

They remained friends but never mated for almost 21 years until Artha died. I had always hoped my Greys would bond and breed, but they never did.

They did share a cage and a travel cage. Other Greys with their carers came on visits, and they always accepted one another’s presence.

Except on one occasion when someone visited with his Grey pair who were not used to outings. His two Greys panicked, and one flew against a window. Luckily, she was not injured.

Male and female parrots together

If you pair up a cock with a hen of the same species and mating behaviour ensues, are you prepared for this?

Easy breeders like budgerigars or cockatiels can breed in a home environment. Hobby breeding can work well in such cases. But even so it is time consuming and if you are a novice you need someone you can trust for advice.

And dealing with the larger species, like greys, cockatoos or macaws you need ample space and breeding is a costly business.

In adding to an existing flock or adding a companion for a single bird, same species will be less problematic than mixing species.

Species like amazons, cockatoos or macaws can become aggressive and territorial in breeding mode and I would avoid opposite sex genders with species like that until you have sufficient experience.

A controversial question- parrots and other pets

If 100% safety is what you insist upon - parrots will never be allowed to interact with predator species like dogs and cats.

Both can kill or wound parrots in a few seconds. Rabbits, hamsters, and similar prey species are fine, but they don’t usually seem interested in one another.

On the other hand, dogs, cats and parrots can and often do to interact together. So is there a firm yes or no? I’m afraid not.

My own experience over 20 years is that I have allowed and enjoyed inter-species interaction.

I never leave different species alone together and I have never had a problem or an injury resulting from the interactions of my own pets.

After all, to a parrot, we are a prey species, yet we learn to live together.

Children will also learn how to behave with parrots if they’re taught from the start to be calm, gentle and not make sudden movements or loud noises.

Green-Cheeked Conures are friendly little birds that need attentive, loving owners. Find out what they're like as pets.

From blushing to purring, do you really know what your parrot is telling you?

How and why do parrots talk? Best talking parrot and teaching your parrot to talk

Parrots don’t have vocal chords. Humans have a larynx; parrots have a syrinx. The same as do songbirds and members of the corvid (crow) family, mynah birds and the Australian lyrebird.