Is your Royal Ball Python insured? Get a quote for £1,000 of vet fees, death and theft cover. Vet fee cover only also available | We've been insuring exotic pets since 1996 | Check out our customer reviews on Feefo.

How often should a Ball python be fed?

This for me is very much age and snake size related, as well as the prey size.

Some say to feed hatchling Royals two or three times a week with a pinky mouse or rat. I find that I little excessive. 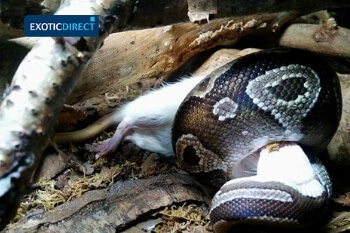 What to feed Ball pythons

During the first few months the Royal will only be able to have pinkies or rat pups.

After this period, you'll be good to rotate feeders, with both rats and mice being offered.

Variety in terms of feed rotation is great, and always my preferred option.

What size food should you feed a Ball python?

A good rule of thumb as they say is: Feeder prey should only ever be as wide as the widest part of the snake’s mid-section. And this is a pretty good indicator to be honest. So well worth sticking to from day one. This will greatly reduce any feeding related complications, like regurgitation.

What else can you feed a Ball python besides mice?

As for feeder option. These are plenty. You'll be able to source the below without much issue at all.

Most suppliers will even deliver frozen prey food to your door, with the guarantee of it still being frozen on arrival with the use of dry-ice.

I use this service multiple times per year to stock-up the freezer with feeder prey.

You can buy frozen prey food from Northampton Reptile Centre or other reptile food suppliers. 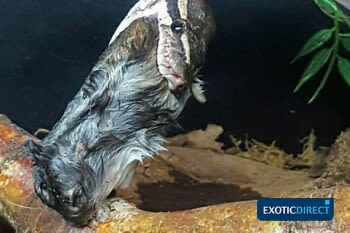 Can you feed multiple mice in one go?

I know keepers that do feed multiple feeders in a row with their Royals. But it's just something that I've never done personally, nor had any reason to.

Any Royals I have bred or kept, have always been a healthy weight once moved on to their permanent keepers, or pet shops. It's all about sensible feeder sizing for your snake.

The 'multi feeding' option is used by many without issue for the most part. However with an inexperienced keeper this “could” lead to obesity and major weight related issues. As well as possible health related complications.

Remember, like many other snake species, Royal's will often show they are hungry. So you don’t need to over  feed to compensate for when it's not eating.

However while they do often wander around the setup in search of food, it’s not such a common occurrence as you would see with a Corn snake for example.

Royals tend to stick their head out of the hides......and wait. More so as adults.

When to feed hatchling Ball pythons

Obviously you shouldn't have to deal with the very first meal in the hatchlings life, unless you have bred these snakes yourself.

But I like to wait until after the first shed has happened which is generally around five to seven days after hatching.

They are still full from the absorption of the yolk of the egg from which they've hatched. Hence the slight growth. And they can live on this alone for weeks.

This can make that initial first feed temperamental and stressful for a keeper to say the least. 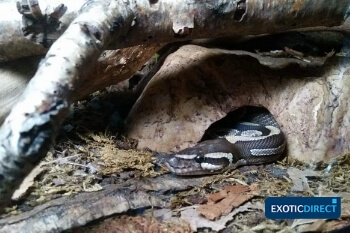 After its first shed, you can wait up to two weeks for your hatchling to feed. You should try every 5 or 6 days to feed your snake in that time. If it still doesn’t eat you should then seek vet advice. They’ll be able to help you and assist if needed.

It’s not uncommon for newly hatched snakes to not eat – I’ve had them go more than 10 weeks before they eventually willingly took food.

If you have purchased a young hatchling snake from a breeder or shop, then you should always ask for their feeding regime or diary.

They should have the feeding dates and various notes regarding the regime of that snake, showing any missed and taken feeds. This then gives you something to work from.

How to feed a hatchling Ball python

The actual feeding of hatchling Royals can be literally hit or miss. They often strike and miss the prey several times, which can be quite comical.

It’s just a case of letting them see and smell the prey, and after a few wiggles to entice the snake, hold it still between the tweezers. They should strike, coil around the prey, and eat.

Ball python striking but not eating and other issues

Don't be disheartened if the Royal doesn't coil and constrict the prey at times, or even strike at it. This is applicable to all ages. Sometimes they just don't bother.

Some keepers do stress out over this. But for me, as long as its eaten, the snake is receiving the nutrition needed.

If you find the snake is sniffing the prey and you can tell it wants to eat, but it’s just not striking at it. Or, it has done a couple of strikes, and missed, then lost interest in the prey, you should leave the prey in the setup for a few hours.

They may well come back to it, as they like to come back to prey when it’s dark. If not, discard the prey and try again in a week. Again, this is applicable to any age Royal.

How long will a Ball go without eating?

As a Juvenile, Ball pythons can go a good month without eating. An adult can go a number of months, if healthy.

You should always get your snake vet checked after a month of not eating, for peace of mind, and to check there are no issues.

You’ll find older snakes can also go on 'hunger strike'. This is a very common Royal issue with many.

It is commonly known that many reptiles will partake in 'self weight-loss'. So for me, I don't see why Royals that are renowned for it also wouldn't do it. Although this is just my own theory.

If there are no health issues, Royals do and can go many weeks without a feed. This is more apparent in the winter/colder months. So once over a couple of years old, the body language of the Royal is vital.

A good rule of thumb is leave the feed until you see them actively wanting and searching for prey. Roaming around the setup of an early evening or at lights out is a tell-tale sign. More so if they have been hidden away for a week or so and rarely seen.

This can also be a once a month feeding regime, which is an extremely common occurrence.

As long as that snake receives regular yearly, or bi-yearly Herp Vet check-up's, and weight loss is not an issue, all should be absolutely fine.

But also, keepers insisting on moving the snake to a feeder container setup. There is absolutely no need to do this, and it’s a myth that a snake will become setup aggressive if you feed in the setup.

You should feed snakes within their own territory (their setup) because the stress of moving that snake into a feeding tub, removing and handling that snake and placing it back in its territory.....really is stressful! And again, stress can equal regurgitation.

Of course, this can be just a couple of the causes from the regurgitation symptom. If it’s more than a one off occurrence, I'd recommend a vet check-up. There could be mouth issues, parasites and many other things only a vet can detect.

Pete Hawkins may receive commission for pet insurance sales that result from you clicking on a link within this article.

Python costs: How much does it cost to keep a Royal (Ball) python?

Royal pythons, or Ball pythons, make excellent first-time snakes but like all reptiles kept as pets they need controlled conditions to thrive. Learn how much that’s likely to cost.

Royal (Ball) pythons as pets and what setup you need

Royal (Ball) pythons can made great pets for beginners. But what setup do you need? This article is packed with advice from vivarium size, to heating, lighting, substrate and more.

When bred in captivity, as most of them are in the UK, corn snakes need a habitat that is as close to their natural environment as possible. This can be achieved through a carefully assembled setup. Here’s how much that’s likely to cost you…