Don't forget your lizard insurance! Get a quote for £1,000 of vet fees, death and theft cover. Vet fee cover only also available | We've been insuring exotic pets since 1996 | Check out our customer reviews on Feefo.

How often should you bath your dragon? | How long to bath for? | What is the best bath temperature? | Water bowl, sink or bathtub? | Soap and bearded dragons | Calcium baths | Bathing during brumation | Bathing a bearded dragon while shedding | Heavy breathing after bath | Bath behaviour inc pooping | Bathing and faecal impaction

I need to be completely honest here, when I see bearded dragons being bathed, it's mostly for the wrong reasons.

The main reason for bathing a bearded dragon should be because they're dirty. Nothing else.

Now, when I say dirty, I mean that they have walked or ran through their own waste.

This bath is for hygiene reasons and is unfortunately vital. 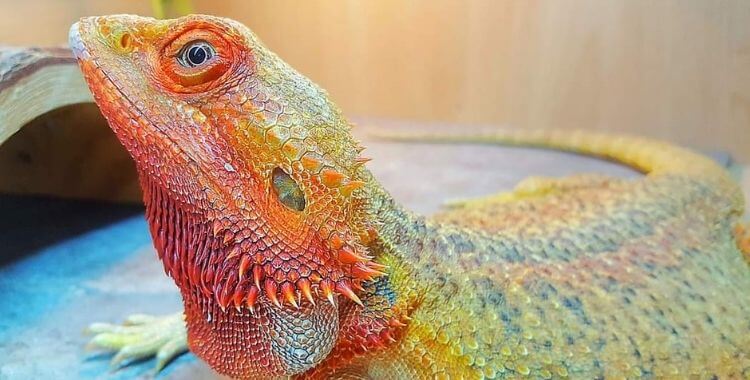 How often should you bath a bearded dragon?

Again, they would only need bathing when they are dirty. The sooner you do this the better really.

Many people will bath their bearded dragon in an attempt to 'bond', this is simply not going to be the case at all.

In most instances a bath is in fact a stressful activity for the dragon. People will miss-read the dragons 'swimming about' or climbing around the sides as a playful activity, when in fact it’s actually the dragon trying to get out.

So again, whether a baby, juvenile or adult – you only need to bath if dirty.

How long should you bath a bearded dragon for?

If it has been deemed you have a dirty dragon, then to minimise any stress, you should aim to complete the bath task as soon as possible. Even the dirtiest of dragons should be clean again in five to ten minutes.

What bath temperature is best for a bearded dragon?

I always aim for a temperature of roughly 30-32°C (86-90°F). You can use either a probed thermometer as you would have in your dragon enclosure, or my preferred method of a digital temperature gun. You can purchase these for around £10 from Argos, or Amazon.

Getting the right temperature is important. Too cold or too hot and you can cause serious harm such as burns and shock to the dragon.

For me, this would be very much age dependent. But also based on how comfortable you are handling and bathing the dragon.

If bathing a baby dragon, a bath may seem like overkill due to their small size. However baby beardie’s are agile and very fast when they want to be, so a bath offers better escape proofing in that sense. The same goes for adult dragons.

A sink would also work for baby dragons. But this would be very dependent on just how confident you are in your handling and that your bearded dragon won't make a run for it, resulting in possible injury.

You should of course always have a water bowl within the enclosure, but it is important that this bowl is not large enough to lay in.

A small bowl for hydration if needed is the safest option.

Laying in water can cause multiple issues for a bearded dragon – from scale-rot, to other bacterial and fungal issues.

Incidentally, if your dragon is laying in water a lot, this is more likely due to an environmental issue. For example, the vivarium temperature could be too warm, so the dragon is trying to cool its core temperature.

Mites can also cause the dragon to soak for relief.

Can I use soap on my bearded dragon?

Use plain tap water only.

Sometimes it's recommended you give your bearded dragon a 'calcium bath'. Mostly this is suggested on social media as opposed to official vet advice.

Now, the concept is not the problem – it’s the actual execution for the needed result.

This would be recommended only if the bearded dragon has hydration or calcium deficiency issues. Both of which can only be diagnosed by a vet via blood-tests and a physical examination, not by a social media recommendation only.

Adding a few drops of liquid calcium to a water source is fine, but the dragon will only hydrate or benefit if the water is drank orally.

Bearded dragons do not hydrate via the skin or cloaca (vent area). This myth has been debunked since way back in the 1980's, yet many keepers still think they hydrate via the cloaca.

Bathing a bearded dragon during brumation

This is something I have done before in the past, roughly 15 years ago, but this was for a specific reason. The bearded dragon I had back then was atadenovirus positive and hydration was a problem with this dragon.

And while I never saw her use the enclosure water bowl, I knew she would drink the water in the bath. So this was a suitable safe option.

Any dragons I've had, either my own or rescued since, I simply provide a water bowl and move it a little closer to them during the brumation period. I have never once bathed a dragon in brumation since – there is no need to do such.

Bathing a bearded dragon while shedding

This is another bath reason I see being talked about.

A bearded dragon’s skin is made from a keratin based protein. This is 100% waterproof. It is fully designed to be tough and armour like, and resilient to their naturally found often harsh environment. But also for a species that comes from areas of little to no water, it is designed to keep any precious water inside the body, and not have it expel via perspiration or similar.

According to Bought By Many’s vet expert Dr Sophie Bell, “water can also get in between scales, not dry out properly and cause infection.”

So bathing a bearded dragon while shedding does nothing really apart from give you a wet dragon.

That being said, if your dragon is struggling, then your vet may advise you to consider it.

According to Bought By Many’s vet expert Dr Sophie Bell “many vets say that it can help if a dragon is struggling with their shed.

It can soften the pieces that are struggling to drop off, instead of pulling them off which you must never do.”

However, Dr Bell advises that bathing shouldn’t be used commonly for this process, only if your dragon is struggling.

As an alternative to bathing, Dr Bell suggests that “using a spray with a fine mist can help, and may be enough during the shed process.”

ExoticDirect would advise you consult your vet before taking any action.

This is something I get asked so many times. “why does my bearded dragon breathe heavily in the bath?”

This has a simple answer - stress.

As already mentioned, bathing is stressful for our dragons – and the heavy breathing, black bearding, frantically trying to climb, all classic signs of stress while in a stressful environment.

This is a reaction also often seen while you are trying to take photos of your dragon. Mostly with a phone camera, it's either the phone colour, or the fact they are not happy about having something put so closely in front of their face within their territory (their enclosure).

Swimming: Of course, bearded dragons can swim, and this is something that would be required in their natural environment on occasion.

They will often fully submerge and swim very much like a crocodile :)

Warm water is a muscle relaxant, and this can and does often produce a poop in the bath with a bearded dragon.

However with this, you have to understand our bearded dragons bowels and digestive system is not like our own. It is designed to utilise moisture and nutrition for absolute maximum benefit. It will even attempt to withdraw more moisture while any waste and urate is in this bowel area.

So with the warm water being a muscle relaxant, a poop being produced is often extremely premature regarding it not being fully utilised for both hydration and nutrition.

Ultimately, this could have negative effects regarding hydration.

If your bearded dragon has faecal impaction however, as diagnosed by your specialist vet, you may find you receive different advice.

According to Bought By Many’s vet expert Sophie Bell "It is likely the beardie will need laxatives from the vet but a warm bath for a round 30 mins along with a very gentle massage from the chest down along the side/flanks can help move things.” Dr Bell advises it’s something they would do in practice and get owners to do.

However, if you’ve not had a diagnosis of faecal impaction, you could be putting your dragon through stress to achieve a poop, without being aware of the potential damage.

You should also avoid massaging your dragon’s belly, unless advised by your exotic vet.

If there are any underlying issues as to why the dragon isn't pooping, then you could cause internal damage and pain, even if done gently.

Ultimately, if your dragon is having digestive issues, always seek your vet's help and assistance.

Drinking bath water, so long as there are zero products in it shouldn't be a problem at all. It's a hydration opportunity after all.

But as already mentioned above, bathing often produces a bowel movement from the dragon. You really don't want your bearded dragon drinking any of the water if this has happened in it.

This could lead to all kinds of health problems (re-introduction of parasites or bacterial infections).

How do you dry a bearded dragon after a bath?

Drying your bearded dragon after a bath should involve only a towel. It’s a case of wrapping up and patting dry (never rub). Never using anything like a hair-dryer, or fans (yes – I've seen these being used before).

Warming your dragon up after a bath

Once your dragon is dry, it’s always best for the dragon to be placed back within its enclosure.

Being a cold-blooded species they do not benefit in the slightest from being “wrapped-up” in a towel or wearing jumpers and clothes.

Being cold-blooded (ectotherms) means they get all body heat via an external source which heats up their body core, this naturally would be the sun. But in the enclosure environment it would be the heat bulb and UVB.

Us humans are warm-blooded, so we benefit from wearing layers trapping in our body heat – again, this doesn't do a thing for our cold-blooded dragons.

Don't forget your lizard insurance! Get a quote for £1,000 of vet fees, death and theft cover. Vet fee cover only also available | We've been insuring exotic pets since 1996 | Check out our customer reviews on Feefo.

Every lizard requires specialist care, regardless and most people looking for a ‘beginner’ lizard are doing so because children will be involved with its care. Therefore my beginners list incorporates this as a ranking order, to determine easiest from hardest

Scientifically known as ecdysis, shedding is a natural process that your Bearded Dragon goes through. Our article will help you to understand why and when your Beardie will shed, and what you can do to help...

Bearded Dragons are omnivores and can eat a range of insects, fruit and vegetables. They need a varied diet and the amount of edible options makes them a fun reptile to feed, as anyone who has seen one chase a cricket will know.